Today I’m writing about training for the Pineland Trail Festival 50K, because I haven’t been doing a whole lot else. I would like to preface any negativity in this post with this: I know I am incredibly lucky to be able to do this stuff. Having the health to push my body this way, the time to fit hours of running into my schedule, and the financial security to purchase shoes, gear, nutrition, etc. are privileges I do not take lightly. Life is good.

So I’m training for a 50K trail race, which equals 31 miles. That’s about 10K more than a marathon, which makes it an Ultramarathon—and it’s only a baby-step into Ultra territory. At the same race where I’m doing my first 50K, some of my friends are doing their first 50-Miler. I know at least seven people who have completed one or more 100-Mile races. I like to chase down a big goal, to do the big thing. That’s why I did my first marathon a few months after my first 10k. I STILL haven’t done a 5K race. So now that I’m training for an Ultra, my brain is doing a thing where a 50K—31 miles—feels like the 5K of Ultramarathons. I have a lot of friends doing the same race as me, which is so awesome and is going to make race day SO MUCH FUN. But as we’re gearing up for it, it also kind of normalizes it. It feels like everyone is doing the thing, so it shouldn’t be this hard or feel like such a big deal. I know the truth is that my friends in this particular run crew are a very small selection of the population that happen to be crazy people. Just, it turns out that hanging out with crazy people messes with your head, and you start to say things like “just” a 50K. So part of my head-game this training cycle is to remind myself that 31 miles is a lot of miles, even if other people are doing more.

Training! It’s actually going really well. Last week I ran 46 miles all together. This week I plan to break 50, which will be the most I’ve ever run in a week (at the height of marathon training last fall I had one week at 47.2). The transition from concussion-recovery to serious training happened pretty quickly. At my last blog post I was just working back to what felt like regular miles, and I’ve continued upping it every week since then. So far my body is handling it. The first week in April was my first week over 30 miles, and that week felt really rough. I was exhausted and just. Couldn’t. Seem. To. get on top of any life responsibilities beyond running and working and social events (and my social events are mostly runs). But the next week I accidentally hit 40 and seemed to be feeling a little better. I’m training differently than I have before because it’s been harder to schedule long runs, so I’m spreading the miles out over more days in the week, and doing multiple runs in the same day rather than one long run. In Maine we’re still working our way towards spring, and when it’s cold and rainy I’m less excited about planning long adventure runs. I find myself circling around trying to hit a certain number of miles on my watch before going to the pub run or whatever thing is next. When I’m feeling low, I joke that my entire week is just a math problem that hurts a lot. And I’m not feeling low all the time—IT’S COOL that I get to do this stuff, and it’s cool that my body keeps handling every increase in training. Watching the miles add up throughout the week is very satisfying. I think it’s just a side effect of being tired, and of being right in the middle of it, that it’s kind of hard to appreciate how hard I’m working. Hopefully it will all pay off on race day—but I am very aware that there’s plenty of time before May 26th to get injured, or for things to stop working. Also, like always, there’s a lot of anxiety about whether I’m doing enough or doing the right things. On a morning trail run last Thursday I tripped and fell a lot, probably just because I was tired from the 12 miles of trails I did the day before, but the next time I was on trails I was more nervous about falling and tripping on roots than I usually am—which, when you’re training for a trail race, is NOT GREAT. But I’m sure it will all come together. Or it won’t, and the miles I put into training will have to be their own reward, which would also be okay.

This is a screenshot from my training log in Strava, the running app I use.

As a closing note, I really appreciate all the support I’ve received from friends who have asked about my training, put up with me mentioning running in just about every conversation, and worked around my schedule when my response to anything is, “Well, I have to run x-many miles that day.” I do hope the above paragraphs don’t look like complaining—I know I’m taking on big goals and doing a good job. This post is just an honest look at some of the thoughts my brain is having as I’m getting ready for next month. As for today, the sun just came out—maybe there will be nicer weather than I expected for my afternoon/evening run. And I’ve saved my longest run for tomorrow, which should be the warmest, clearest day this week. In conclusion: my feet hurt, but life is good. 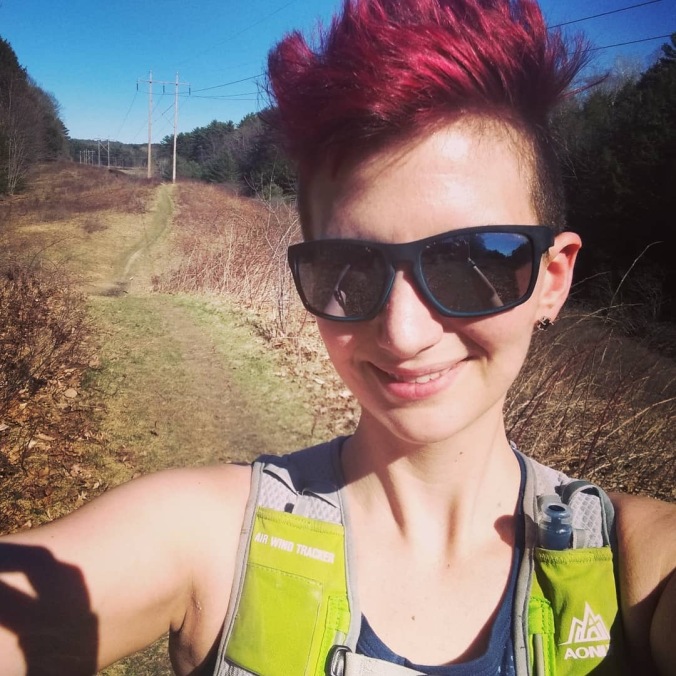 One thought on “The Grind”