Hi! Concussion update: I feel better! But it took quite a bit longer than the 2-3 weeks promised by all my “help I got a concussion” google searches. And by better I mean that I haven’t had a concussion headache for two weeks—I’m still testing things out and increasing my activity so this doesn’t necessarily mean I won’t get another concussion headache if I accidentally hit my limits. We’re currently almost 8 weeks out from concussion, so I had about 5.5 weeks of decreasing but continuing symptoms. I’m putting that out there in case this comes up in anyone else’s panicked googling about what to expect from a concussion. As the weeks went by I worried that I was one of those unlucky folks for whom concussion symptoms last years, and I was making all these calculations about how far to push it. If I get headaches when I run now, is it making the headaches worse if I run through them? Or is this just how running works now and I can run through them as long as I can put up with the pain of having a headache? For the last few weeks, though, I’ve actually felt better and I’m working back up to regular levels of fitness. 15 miles last week is way fewer than I wanted to be running this time of year and this close to a 50k race in May, but it’s the most I’ve run since concussion day on Jan 11th, and I also attended two circuits classes last week. My strength training goal is to hit the gym three times a week—one class and two more run-muscles-focused workouts on my own—so it felt great to make it out to more than one gym day. My message to any concussed people out there is that, if your concussion symptoms are hanging around longer than the expected amount of time, it doesn’t mean you won’t feel better. Rest up, take care of yourself, and give it a few more weeks. Of course I’ll keep this space updated about any lasting effects that have yet to make themselves known!

Blogging about my concussion was pretty helpful while I was having all these brain things going on that I didn’t understand. I did go to work the day after my last post, though, and as soon as I went back to work, work was the only thing I had energy for. Some people advised me to take more time off, and I would have if standing up was still making me queasy, but with my finances the way they are at the moment (I make tips and there is a HUGE difference between summer and winter income) I needed to prioritize working as soon as I was able. I wasn’t at all sure I would make it through the day but I felt pretty safe going into my coffee shop on a sleepy weekday to give it a try. It also helps that my work crew is a good family and I knew 100% that all my coworkers had my back. I needed to do everything very slowly for a few days and I still felt off and weird and headachey but I made it through. God bless my manager for how many times he asked, “How are you feeling, Grace?” that first morning. The answer was always a very tentative, “I think I’m okay.” The HILARIOUS thing is that, while having very few cold symptoms, my voice was getting a little hoarse towards the end of that first day, and I woke up the next day with LARYNGITIS. Nothing hurt, but it sure sounded terrible. My voice was reduced to whispers and occasional squeaks. Once I’d convinced people I wasn’t actually dying and it didn’t hurt to talk as much as it hurt their ears to listen, most people agreed the timing was pretty funny. And thankfully there was enough side work for me to do that I didn’t have to try talking to any customers.

I’ve learned a lot about listening to my body, and getting back to regular activities has been a slow process with several relapses. I received a few sessions of osteopathic treatment from a dear friend who is a DO, and that helped immensely. I’ve also been taking some supplements that are recommended for concussion (arnica, fish oil, homocysteine cardioplex) and I stopped drinking for several weeks after concussion day, right up until my birthday the first week of February. I think not drinking was a really good call, especially when I wasn’t running much. Running helps me maintain my mental health and stay positive during the winter, so I expected my mood to plummet when I wasn’t able to run. I actually felt fairly level and okay (though injured and exhausted) and I think removing alcohol, a depressant, at the same time I removed running helped me stay fairly stable.

Big news in other parts of my life. I purchased an iPad Pro for making digital art, and it is the BEST. Some of you have seen my sketches on Facebook an Instagram. More info and updates on that to come. Oh, and I’ve been working on my gym selfie skills: 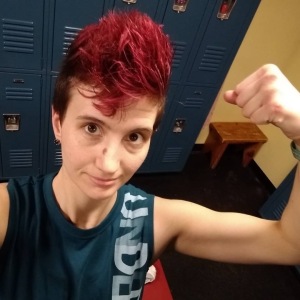