Time for a race-week blog update. Pinelands 50K is in 3 days! I feel confident about my training, and I feel like I put in the work that I needed to. At my last blog post I had just logged a 46-mile week. I caught a cold two days later, and still finished the week out at 52, my most ever. The next week I hit 60. 60 miles in a week! Starting from concussion week back in January, I went from zero to 60 in just 15 weeks.

My heels had been hurting a little bit this whole training cycle, though. I think part of it was switching to a more minimal shoe in January, the Altra Solstice. Altras are SHAPED LIKE MY FOOT. Having enough room for my big toe is AWESOME and I don’t want to go back. But they’re a little less supportive in the footbed, and the Solstices especially are very light-weight without a lot of cushioning. I think they’re a better choice for shorter road distances than the kind of heavy endurance training I was doing. A few weeks ago I upgraded to Altra Escalantes. The Escalantes cost more and have a little more padding, while still being a very minimal zero-drop shoe. They also have a mesh upper (as did the Solstice) which is a NECESSARY shoe feature for me to avoid aggravating a tailor’s bunion on the outside of my right foot directly beneath my little toe. The Escalantes were immediately very comfy, so comfy I went on a surprise 22-mile long run from the store immediately after buying them, but right after that 60-mile week my little bit of heel pain exploded into a LOT of heel pain—three weeks out from the race. Oh no! 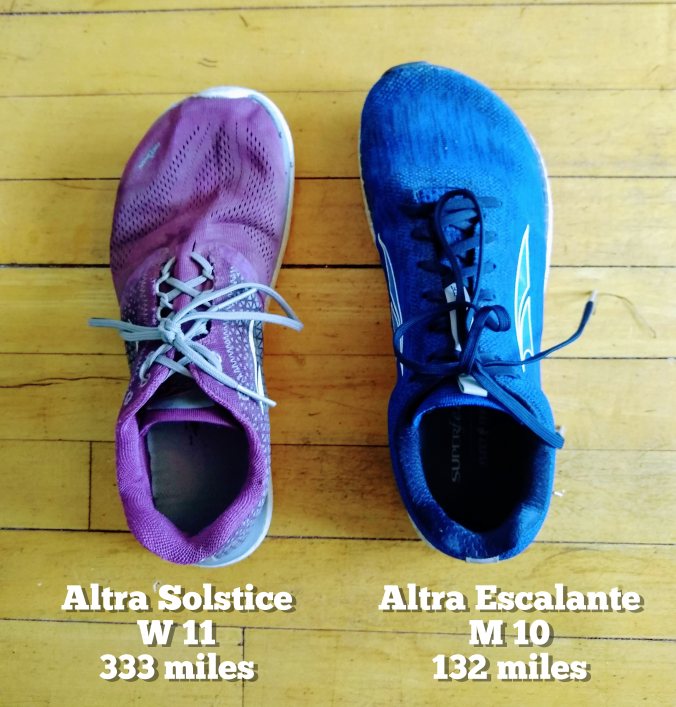 I am not sponsored or paid by Altra but please let them know I’m available.

If you’ve never trained for an endurance race, here’s how it works: You up your weekly mileage slowly (ideally by no more than 10% per week, but everyone fudges that a little). You do one long run per week, and up the mileage of that run slowly as well. If you’re training for a marathon or ultra distance, you may be doing back-to-back long runs. This helps you get used to running on tired muscles and simulates how you’ll feel at the end of a race. There can be a lot of run math involved in stacking up miles per day, and miles over a 36-hour period. You don’t do a long run equal to your race distance; this would only wear you out and if your goal is to run a certain distance, why do it before you do it? You have to trust that your training will get you there on the day. And three weeks out from the race, it’s time to taper. You ease off your miles slowly, try not to panic, and rest up for race day.

So my heels, mostly the right one, started hurting lots right as it was time to start cutting back miles. I did a slightly more aggressive taper than I meant to, but not by too much—45 miles down from 60 in the first week, 35 in the second. Meanwhile I was trying everything to cut down on the heel pain (plantar fasciitis, to use the technical term). Taping, new inserts for work, stretches, rolling, ice, whatever. On one very rough 20-mile day I got a giant blister on the bottom of my foot from the tape I was using. The next day, due to walking funny in the morning when my heel was killing me, my tailor’s bunion flared up in a VERY PAINFUL way and started hurting when I was just walking around. Yikes. But with more ice, mesh shoes for work, bandaids for my blister, I was able to keep running. And my heel feels better after a 35-mile week than it did after 60. I did up my training pretty quickly, so hopefully I can avoid this next time if I keep up with all the stretches and train a little smarter. I also saw a podiatrist yesterday. He recommended giving my feet some rest when possible for the plantar fasciitis, and to mostly keep doing what I was doing (with the exception of KT tape because I was doing it wrong and in danger of squishing a tendon!). He also gave me a cortisone shot in my tailor’s bunion to cut down on the swelling, and the good news is that if I can keep wearing the right shoes I’m probably not going to need bunion surgery someday. Yay!

Everyone has an ache or pain or worry they panic about during the taper. I talked to a lot of friends yesterday doing the same race, and everyone has a thing. When you cut down your mileage suddenly, your body has a lot of leftover energy, and your brain uses that energy to panic. The mental game is to KNOW that you’re going to panic, accept it as part of the process, and convince yourself that it’s going to be okay. My other big worry this week was support at the race. My parents can only be there for the morning, and I have giant club full of friends who will be there cheering and running their own races…but I don’t know how I’m going to feel after running for 6-8 hours, and I really wanted someone there at the end specifically for me. And then I was pretty stressed (understatement) about being vulnerable enough to ask for that kind of support, and not sure who to ask, as it is a holiday weekend after all and I’m just going to be in the woods for 7 hours. It’s not the most exciting spectator sport. But my roommate, who is a hero and a saint, was able to switch his late shift for an early one (we work at the same shop). He’ll be able to be there when I finish—or very soon after, if I have a really good day—and I won’t have to drive myself home. So with that in place and my feet feeling somewhat better, I’m getting pretty excited to go out there on Sunday and actually do this thing I’ve been working towards for months. Hopefully, knock on wood, if nothing goes wrong, I’ll be a member of the Ultra club when I write my next blog post. Fingers crossed. And to close out: Good luck to all my friends racing this weekend. We’re all gonna crush it.

One thought on “Three Days to Pineland Farms”