As many of you know from seeing my facebook posts, I did it! 50K. About 32 miles. Ultramarathon. It was really hard. I expected it to be hard, and it was harder than I expected. It also went really, really well. I was capable of running the entire way, and I actually sprinted into the finish line, past so many friends, high fives, and smiling faces. There’s a lot of photos of me in that moment, but I wish I had photos from my perspective. I was out of the woods, done with the fields, heading up the grassy hill towards the finish line—and then I heard my name called out over and over again, and looked up to see an endless line of high fives from my friends gathered at our club cheering tent, and there was my roommate with a hand-drawn sign (which he’d gotten SIGNED by folks from our hashing club and the donut shop), and after seven plus hours out there in the sun my body was capable of running, really actually running, right until the end. It was magical.

Running until the end is my biggest accomplishment of the day. I know what it feels like to limp into a finish line. On my first marathon (MDI, Oct. 2017) the outsides of both of my knees were in intense pain for about the last eight miles of the race and I was forced to walk. I tried to put on a run for the last few paces and only ended up limping more. My legs wouldn’t go. This pain was due to iliotibial band syndrome, or IT band pain, which is one of the most common injuries for runners. I rested up, but it flared up again on a 10-mile race I hadn’t trained enough for, and then again during training for my 20-mile relay leg of the Riverlands 100 Miler in May 2018. I finally invested in physical therapy (cue $1,000 of medical debt, thankfully paid off by now) but started it too close to race day for it to have a real effect, and I walked about the last 11 miles of that 20-mile leg. (But I finished. And didn’t invalidate the 80 miles my teammates had already run.) Thanks to that experience I almost didn’t put another marathon on my schedule that year, and I wondered if my body just wasn’t cut out for the kind of distance I was asking it to go. But I signed up for Maine Marathon, kept doing my PT and added more strength training, got a coach and stuck to my training schedule, and in September 2018 I was able to run the entire distance of my second marathon—though I did have pretty intense IT band pain on the outside of both knees for about the last 6 miles. It was the same pain, but I’d done enough strengthening and training that my legs kept working just long enough.

Maybe it was the day, maybe it was the slow speed, maybe it was the trails (though Riverlands was also slow and trails)—but maybe it was all my hard work. It always feels like I’m not doing enough, but maybe bringing my stretch band to the gym every time I go and doing my clamshells and monster walks in the minutes before every circuits class, and maybe all the heavy-lifting I was doing as I was just getting out of my concussion fog and starting to up my miles—maybe it all paid off, and maybe, just maybe, I earned it: A good day. A 7 hour, 22 minute journey with fully functioning knees.

I don’t mean to imply that it was painless. On those other long races I mentioned, I was able to tell myself that things hurt as much as they did because something had gone wrong. On Sunday, I learned how much it hurts when everything goes right. Around mile 17 was when it really set in; an deep ache in my thighs and butt and everywhere. Every step hurt, uphill and down, and a 14-minute mile felt like an 11-minute mile had a few hours before. I asked myself, hang on, why am I doing this again? Why is this fun? What is this for? There was still such a long way to go. The only thing to do was to get on top of the pain. I told myself that this is what I wanted. This is what I’d asked for. And since I was still able to run, I’d better do it. The mental game was easier after mile 20 or so, because with less than 11 miles to go I knew that I’d walked farther in worse shape, and had the perspective to be so grateful that I was still running. And I did walk some, and I stopped at aid stations, and I took my time. Maybe I should have walked more in the beginning—walking every hill is a standard ultra strategy. But I still have more trouble on downhills, and at the end jogging uphill felt better than stopping to walk. I did have a danger spot below my left knee by the end that was already saying no on downhills and probably would have turned into an injury if I’d had to go much farther. For the last few miles I ended up leapfrogging with several different batches of runners. They would pass me as I picked my way down a steep slope, and then I would chug slowly by them while they walked the next hill. I was hoping for a time under 7 hours and came in 22 minutes over, but the course was slightly long and it was a hot, hot day, my training hadn’t included quite enough hills, and I had so many friends out there—it was nice to be able to stop a minute and chat when I saw them. And there’s always next time. Which is not a thing I thought I’d be saying if you’d asked me around mile 17. 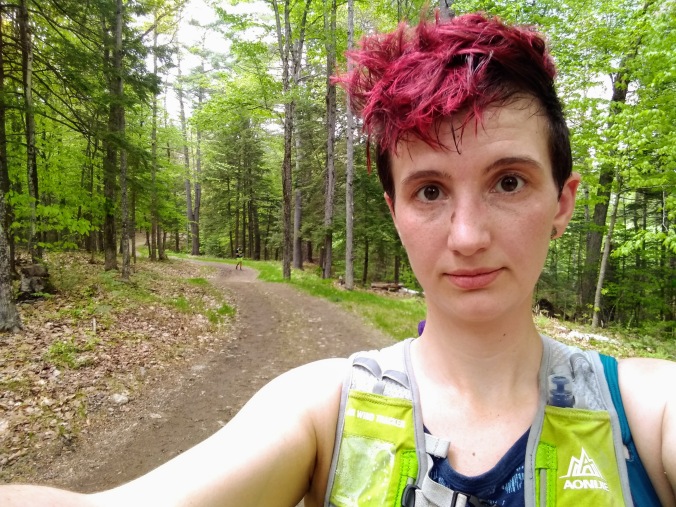 I don’t usually race with my phone but I thought I might want it. I didn’t. I only took this selfie because there was an alarm ringing, and to turn it off I had to take the phone out anyhow. Mile 30ish.

There’s lots more I could say about the race. It was such a big day with so many moments. I’m publishing this alongside a facebook post tagging a lot of people specifically, but I don’t want to close without saying thank you, again, to my friends and my parents and all the people who supported me and cheered me on. You’re the best and I am so lucky to have you on my team.

Race day swag! Yes, the medal was a cowbell. Yes, it works.