The curve of my NaNoWriMo graph has a different shape this year than it did last year and the year before. I won both years, by the way—when I start NaNo, I finish. Usually I start out strong, though and things don’t get difficult until week 2. In 2013, I fell behind on Day 11. Last year, it was Day 9. This year, well, take a look. I started out behind, and didn’t even catch up until Day 7, the end of week 1. And today finds me behind again, but only by 3,000 words. I’ll catch up tonight or tomorrow. 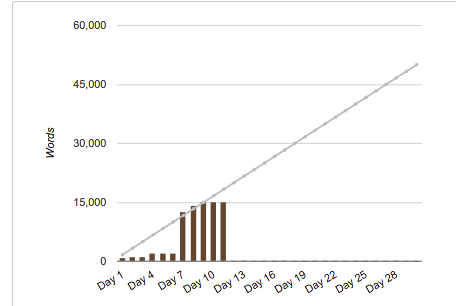 Last week, nothing was working. The intro I’d planned turned out to be the wrong way into the story. I couldn’t get a feel for my main character. The next episode of Parks and Rec kept happening on Netflix autoplay. Mentally, I think I was exhausted from all the hard story work I’d been doing on my dragon book right up until I put that project down for Nano. My subconscious story-generator needed a few days’ rest before it could start cranking out ideas for a brand new story—even if it’s actually an old story, and even if it’s a story I chose because I thought it would be less complicated.

This is what I like about NaNo, and the monthly goal. It would be really easy to let a necessary few days of rest turn into gratuitous months or even years. I’ve done it before. But when the clock is ticking and a goal is set, it creates a constant nagging reminder that your writing needs you. So even though I didn’t like anything about my story and even though I was feeling discouraged, I showed up on Saturday to see what I could do. It turned out I could do a lot. I wrote 10,500 words that day, which is a personal best.

I guess what I’m saying is, don’t let a few days of inaction towards a goal make you feel bad. Maybe your brain needed that time to recharge. Maybe your spirit needed that space to find the story. Just stay focused on the big goal, and keep showing up to write.