Yesterday, I said a lot of my poetry was too personal to share. I stand by that, as it involves other people, but here is a beautiful blog post by an author who shared the most personal thing, the scariest thing. She writes this thing incredibly well, and it is absolutely worth a read—and I suspect this blogger is someone worth following. The Scariest Thing on Chalk the Sun

Another interesting thing about yesterday’s post: it didn’t even occur to me until much, much later that I had posted a poem containing a swear word. The third word of the second line, if you didn’t notice. It is the only word that can go there, and I’m not apologizing. I just find it interesting that it didn’t even occur to me that the word might offend certain audiences. It’s not something I even considered, probably because I know the words to this poem so well that they are a part of myself, and how can a part of myself be offensive?

Profanity in writing, however, is something to consider, especially as an aspiring author of Young Adult Literature. At what age level in books is it appropriate to include characters who swear?

We are, as writers, going for realism. I believe Stephen King said something to the effect of, if your character wouldn’t say “Oh sugar,” then you should write them saying the other thing. Authors writing in a fantasy world have the luxury of making up a swear word or two for their characters to use vigorously. My book is not set solidly in the real world, but the characters come from the real world, so that’s not an option. I’m aiming at the 14 and up crowd, and here’s the solution I’ve reached:

I have one character who swears, and one character who doesn’t. This isn’t an arbitrary decision; it comes directly from the essence of the characters and helps define who they are. The swearing habit actually says a lot about the character. It shows that he is more attached to this world than his friend, and it shows his tendency to fling words at things when he’s angry. When he takes the Lord’s name in vain, it’s even a clue about religious upbringing, though possibly not in the way you’d expect. The swearing is actually a major way that the characters are differentiated from each other in dialogue, especially in those life-or-death type scenes, and I hope this will help the reader get a handle on the characters, and on who is speaking when. So, yes, I let my one character swear freely—but never excessively. He swears when that is what he would say, when that is the only thing he would say, and when the situation warrants it. I never put swears in for the intention of shock value, or to make it seem “edgy.” They are what they are. Would I edit them out if someone who wanted to publish my book asked me to? I honestly don’t know if I would; I think the dialogue would seem artificial without them.

I have completely refrained from using the F-word in my book. I feel the use of that word would cross a major line, one that my guy occasionally saying, “Oh shit,” in a really tricky situation or “dammit” in a moment of emotional duress doesn’t even approach. Would you agree?

I’d love to hear comments on this one, I think it could be a great discussion.

Oh, and I drew this last night (this morning? I couldn’t sleep). Maybe later I will finish it. Did you know Vanya could smile? 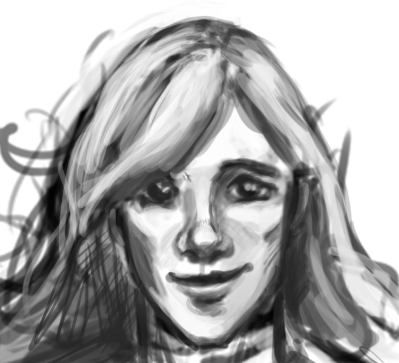