Hello. Sorry for the lack of updates. I haven’t even gotten around to taking the motorbike photo I promised. It’s just weird to stop during a daily activity and say, “Hold up guys I need a photo!” Zooming off to the city has already become far too normal to be event-worthy. But I will get you that photo, maybe this week!

Settling in has been good and bad. I love all the people here and the new friends I’ve made. I feel pretty insecure about my job and my abilities as a teacher. Somehow we keep getting through another four to five classes each day, but it seems like the material is always too easy for the kids sitting in front and too hard for the kids sitting in back. It’s hard to find a balance.

This weekend is a holiday weekend. There is no school on Monday for the Buddhist holiday of Vesākha, where (from what I’ve gathered from my students) it is traditional to visit a temple, light incense or a candle, and process around the temple three times. I was feeling a little bummed that I didn’t have any exciting travel plans for the long weekend, but simultaneously relieved that my lack of exciting plans precluded any exhausting overnight bus trips, since I never sleep well on those. I had decided to drive to Sukothai, a historical site a little over an hour away, but relaxation won out when I woke up with a fever yesterday morning.

It is a truly bizarre experience to be living in Thailand and find yourself unable to get warm. I had to get one of the comforters out of storage. It is a bright blue which actually matches some of the pillowcases I had bought, and the design features a child’s version of the solar system complete with all the planets. I stayed in bed literally the entire day aside from necessary trips to the bathroom—which is more challenging than it sounds, because there are stairs, and you can see through the stairs, and part of my illness manifested in a touch of vertigo. I thought I was feeling better in the evening, until I ran downstairs to ask a valiant friend to bring me some items from the convenience store (yogurt, and grape juice). I tried to move back up the stairs too swiftly, nearly fainted, and had to sit at the bottom for a few moments and regain my composure.

When I woke briefly at 3 AM my fever had lifted, and things seemed promising for today aside from the killer stomach ache which seemed to have manifested in place of yesterday’s headache. I couldn’t decide where eating was a good idea or not, but I eventually went with yogurt and plain, room temperature noodles. When I said I hoped to lose weight in Thailand, this isn’t quite what I had in mind. Now it is afternoon again, and the stomach ache has receded for the moment…. only to make way for the return of headache and fever! Huzzah!

Hopefully I will fell better enough to give you a more exciting update soon.

My favorite little guardian demon from the Grand Palace in Bangkok.

So I’ve been here (Thailand) for nearly two weeks. You’re probably wondering what the heck is going on. I guess the answer is, “A lot!”, which is also the answer to, “Why the heck haven’t you blogged about it yet?”

I got in to Bangkok last Wednesday morning, and then waited a few hours for the shuttle to the hotel. I had the rest of that day free, and my main achievements were buying water and beer from the 7-11, taking a nap, and finding some delicious pad thai.

Orientation was five days of classes in an air-conditioned hotel with about 70 other westerners (mostly americans, but there were two brits and an australian). I found the whole thing to be a stressful social situation, which isn’t to say I didn’t have fun, but my faculties were maybe too overwhelmed by the Implications of Being in Thailand for a Year to really participate in the “Wow, new best friends forever!” thing that was going on around me. I also made a point of not being dependent on other participants to go do things, and as a result ended up doing a lot of things by myself… go figure. :-p I did have a lot of good conversations with a lot of people over the week, and met quite a few people whom I would love to see again and have the chance to become better friends with. One of the happier moments was breakfast at the hotel on the first day, when I found the three people (Jayson, George, and Katie) that had been part of my TEFL class, and whom I had been communicating with over the internet for the previous three months. Big smiles, big group hug. It was a good moment! 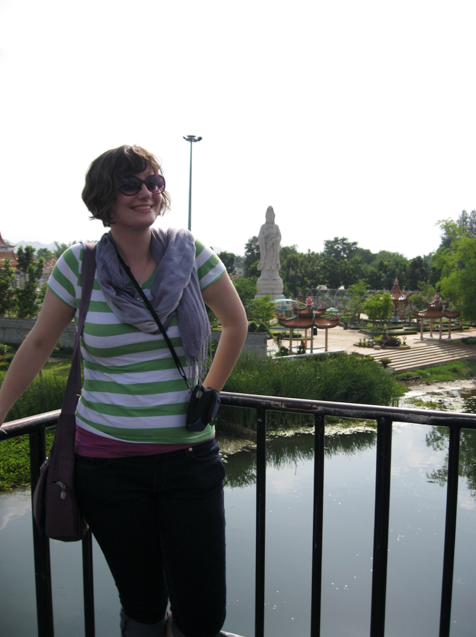 On the Bridge over the River Kwai. My arm looks like a noodle, but I sure am in Thailand, yessah!

After some sightseeing and one night at a resort hotel on the last day of orientation, I boarded a flight to Phitsanulok from Bangkok’s domestic airport on Tuesday evening. Nok Air was the cutest; all of their planes are painted to look like birds.

Next would be the big moment: meeting my coordinator at the airport and rocking the first impression. I was tired and nervous, but as soon as I saw my welcoming committee I knew everything would be alright. The school director, my coordinator (and boss of the English/Foreign Language department), and three young teachers from Canada, Japan, and Thailand were all waiting for me. The director and my coordinator welcomed me and gave me a lei of flowers for my wrist (which didn’t quite fit over my big american hands), and then I piled into a car with the three young teachers to go to my new home.

The house is nice! My school is a boarding school, so am living on campus in an area with several houses for teachers. It’s like college; all my friends live next door! I live with a Thai teacher (she teaches English and German) who was able to show me around when I got here, and a Korean teacher (she speaks really good english and will be teaching Korean at the school) who arrived three days after I did. The house has four bedrooms, so we may be getting one more teacher later on.

My first few days were a little strange as I navigated settling in. I was told that I wouldn’t begin teaching until Monday, even though school had already started, but after the busyness of orientation it felt strange to have little to do. I sat at my desk in the English office at school, but felt like I was shirking my duties somehow as all the other teacher came and went from their classes. Also, having more time to think about it only increased my nervousness about the first day in the classroom. On Friday morning, my class of M1s (Mathayom 1, equivalent of 7th grade) came looking for me, and I ended up teaching their class and taught all my classes for the rest of the day. Definitely had some awkward moments, as I had very little prepared, but it went okay and I feel so much better now about being able to do my job.

The other thing that took some getting used to is that my school is actually fairly remote, and you need a motorbike to even go to the convenience store. It’s about a 20 minute motorbike ride into the city (Phitsanulok). Everyone was very nice and took very good care of me, but I don’t like having to rely on other people to do anything or go anywhere! I knew I had to get the situation sorted as soon as possible… which led to an exciting purchase yesterday evening. More info (and pictures!) to come in my next post. 🙂

There’s lots more to tell about teaching and making new friends, but it will have to wait until next time. I’ll leave you with a few photos from the lovely dinner I had with one of the teachers from my department on Wednesday evening:

Top right is the teacher who took me out to dinner, and top left and bottom right are the restaurant owners, and also the mother and grandmother of one of my students.

Fried chicken with rice and cashews. Have I mentioned that everything I’ve eaten here was delicious?

All my bags are packed, it’s time to go

I’m standing here, outside your door…

I’ve been singing that song all week. My bags have been (mostly) packed since late last night, and I’m sitting at the Portland International Jetport waiting to board my first flight. This one’s to JFK, where I’ll board a flight to Abu Dhabi later this evening. My final flight is from Abu Dhabi to Bangkok, and I should arrive about 25 hours from now. I’ve just said goodbye to my parents and my boyfriend, and I’m a little sad. It’s been a wonderful last weekend in Portland, though; my boyfriend and one of my oldest friends teamed up to orchestrate a surprise going-away party on Friday evening, and there have been a lot of good times around all the packing and panicking and last-minute goodbyes. Thank you for all the support and well-wishes; I love you all, and I will do my best to keep you posted as my journey continues.